Bassist and steel drummer Ron Reid is an associate professor in the Contemporary Writing and Production Department at Berklee. We just met after my recent clinic at Berklee, and the interview has just shown up in the last edition of Berklee Today! 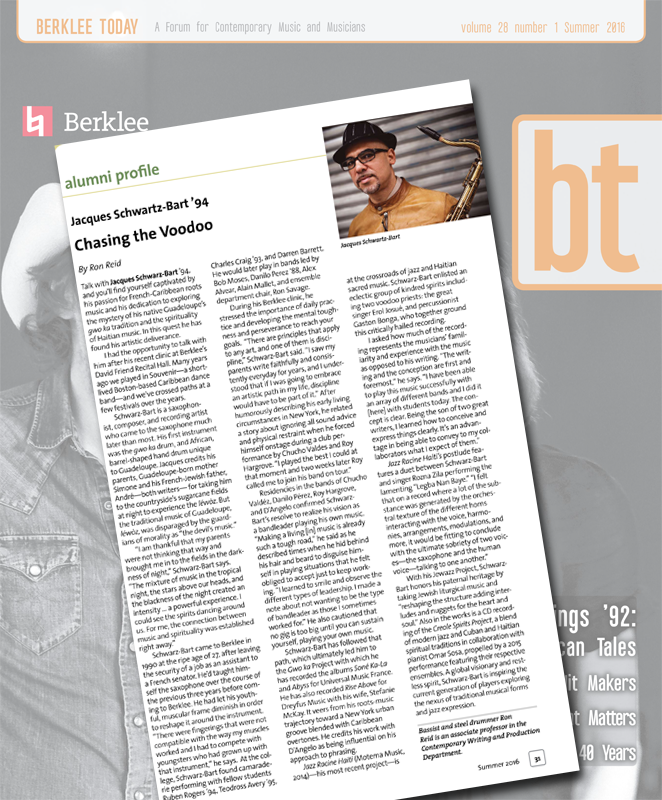 Talk with Jacques Schwarz-Bart ’94, and you’ll find yourself captivated by his passion for French-Caribbean roots music and his dedication to exploring the mystery of his native Guadeloupe’s gwo ka tradition and the spirituality of Haitian music. In this quest he has found his artistic deliverance.

I had the opportunity to talk with him after his recent clinic at Berklee’s David Friend Recital Hall. Many years ago we played in Souvenir—a short-lived Boston-based Caribbean dance band—and we’ve crossed paths at a few festivals over the years.

Schwarz-Bart is a saxophonist, composer, and recording artist who came to the saxophone much later than most. His first instrument was the gwo ka drum, and African, barrel-shaped hand drum unique to Guadeloupe. Jacques credits his parents, Guadeloupe-born mother Simone and his French-Jewish father, André—both writers— for taking him to the countryside’s sugarcane fields at night to experience the léwòz. But the traditional music of Guadeloupe, léwòz, was disparaged by the guardians of morality as “the devil’s music.”

“I am thankful that my parents were not thinking that way and brought me in to the felds in the darkness of night,” Schwarz-Bart says. “The mixture of music in the tropical night, the stars above our heads, and the blackness of the night created an intensity… a powerful experience. I could see the spirits dancing around us. For me, the connection between music and spirituality was established right away.”

Schwarz-Bart came to Berklee in 1990 at the ripe age of 27, after leaving the security of a job as an assistant to a French senator. He’d taught himself the saxophone over the course of the previous three years before coming to Berklee. He had let his youthful, muscular frame diminish in order to reshape it around the instrument. “There were fingerings that were not compatible with the way my muscles worked and I had to compete with youngsters who had grown up with that instrument,” he says. At the college, Schwarz-Bart found camaraderie performing with fellow students Ruben Rogers ’94, Teodross Avery ’95, Charles Craig ’93, and Darren Barrett. He would later play in bands led by Bob Moses, Danilo Perez ’88, Alex Alvear, Alain Mallet, and ensemble department chair, Ron Savage.

During his Berklee clinic, he stressed the importance of daily practice and developing the mental toughness and perseverance to reach your goals. “There are principles that apply to any art, and one of them is discipline,” Schwarz-Bart said. “I saw my parents write faithfully and consistently everyday for years, and I understood that if I was going to embrace an artistic path in my life, discipline would have to be part of it.” After humorously describing his early living circumstances in New York, he related a story about ignoring all sound advice and physical restraint when he forced himself onstage during a club performance by Chucho Valdes and Roy Hargrove. “I played the best I could at that moment and two weeks later Roy called me to join his band on tour.”

Residencies in the bands of Chucho Valdéz, Danilo Pérez, Roy Hargrove, and D’Angelo confrmed Schwarz- Bart’s resolve to realize his vision as a bandleader playing his own music. “Making a living [in] music is already such a tough road,” he said as he described times when he hid behind his hair and beard to disguise himself in playing situations that he felt obliged to accept just to keep working. “I learned to smile and observe the different types of leadership. I made a note about not wanting to be the type of bandleader as those I sometimes worked for.” He also cautioned that no gig is too big until you can sustain yourself, playing your own music.

Schwarz-Bart has followed that path, which ultimately led him to the Gwo ka Project with which he has recorded the albums Soné Ka-La and Abyss for Universal Music France. He has also recorded Rise Above for Dreyfus Music with his wife, Stefanie McKay. It veers from his roots-music trajectory toward a New York urban groove blended with Caribbean overtones. He credits his work with D’Angelo as being influential on his approach to phrasing.

Jazz Racine Haiti (Motema Music, 2014)—his most recent project—is at the crossroads of jazz and Haitian sacred music. Schwarz-Bart enlisted an eclectic group of kindred spirits including two voodoo priests: the great singer Erol Josué, and percussionist Gaston Bonga, who together ground this critically hailed recording.

I asked how much of the recording represents the musicians’ familiarity and experience with the music as opposed to his writing. “The writing and the conception are first and foremost,” he says. “I have been able to play this music successfully with an array of different bands and I did it [here] with students today. The concept is clear. Being the son of two great writers, I learned how to conceive and express things clearly. It’s an advantage in being able to convey to my collaborators what I expect of them.”

Jazz Racine Haiti’s postlude features a duet between Schwarz-Bart and singer Rozna Zila performing the lamenting “Legba Nan Baye.” “I felt that on a record where a lot of the substance was generated by the orchestral texture of the different horns interacting with the voice, harmonies, arrangements, modulations, and more, it would be ftting to conclude with the ultimate sobriety of two voices— the saxophone and the human voice—talking to one another.”

With his Jewazz Project, Schwarz- Bart honors his paternal heritage by taking Jewish liturgical music and “reshaping the structure adding interludes and nuggets for the heart and soul.” Also in the works is a CD recording of the Creole Spirits Project, a blend of modern jazz and Cuban and Haitian spiritual traditions in collaboration with pianist Omar Sosa, propelled by a 2015 performance featuring their respective ensembles. A global visionary and restless spirit, Schwarz-Bart is inspiring the current generation of players exploring the nexus of traditional musical forms and jazz expression.